Home » Understanding the Generational Divide – Its Impact on Slang

Understanding the Generational Divide – Its Impact on Slang 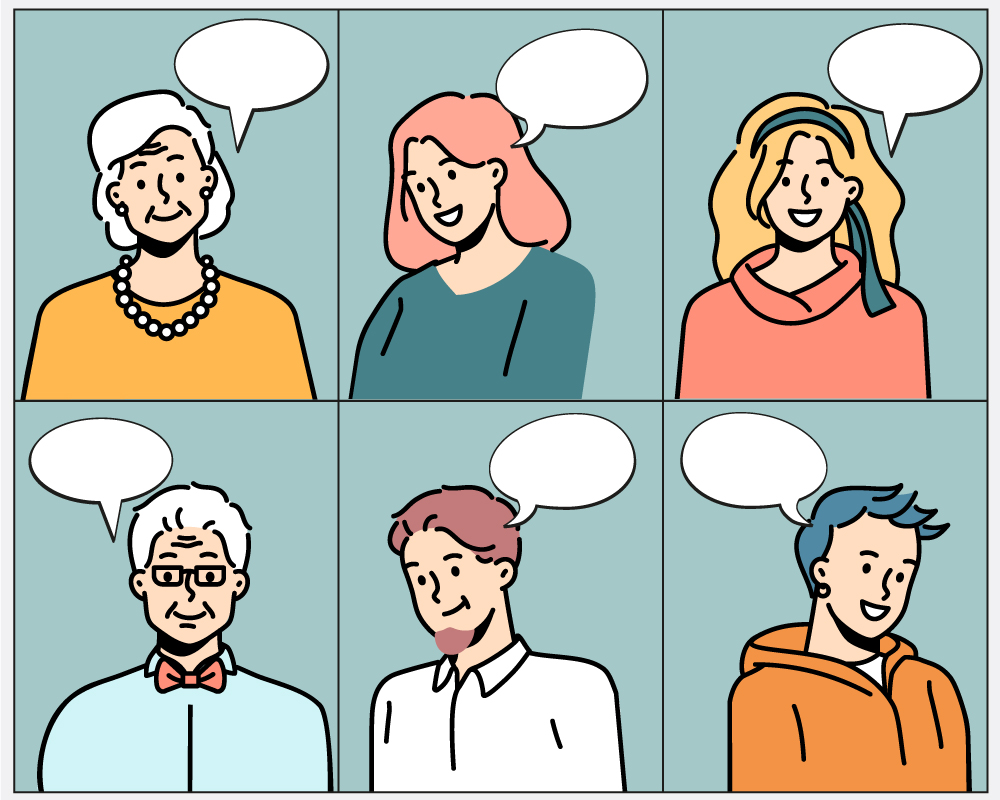 In a world where generational labels like “Ok, Boomer” and “Parennials” are being thrown around and becoming normalized more than ever, do any of us know what exactly they mean?

This blog post will go on a deep dive, exploring what the generational divides are and how the younger, more progressive generations are the ones who dictate what new slang words are included in our global lexicon.

Though most of the generational divide is defined by America’s course of history, it has impacted the rest of the globe due to its popularization of modern-day entertainment, its imposing presence in World War II, and its military colonization of foreign cultures. This developed a shift of trends in pop culture and international standards and impacted regions across the western world, especially with the advent of internet technology and global communication.
Below is a summary of the recent generations and what makes them stand out from one another.
● The Greatest Generation (GI Generation): Born 1901–1924

This generation defines the people in America who grew up during the Great Depression and fought in the second World War. The term is thought to have been coined by former NBC News anchor and journalist Tom Brokaw, who wrote a book titled “The Greatest Generation”.

This generation was born during a period of economic trouble during the Second World War and grew up in the tense ever-changing world afterwards. This is the smallest of the generations, and they are known for being thrifty and resourceful, respecting authority, and behaving loyally towards their jobs and families.

This generation makes up a significant portion of the world’s population, especially in more developed nations. The term “Baby Boomer” is derived from the boom in births that took place after the return of soldiers from WWII. Because of their high numbers and relative economic prosperity during their careers, they have been a significantly influential generation.

This generation is named because they were born near or came of age during the dawn of the 21st century. This is the first generation born into a digital world where technology has always been a part of their daily lives. They are much more progressive in their political and religious views than their predecessors and are more likely to explore a variety of different career paths in their lifetime. They primarily want to travel young and pursue hobbies that bring a sense of personal fulfilment.

This generation is the follow-up to the XYZ naming convention and the first generation to grow up in a world where social media communication is standard. Due to this, they are sometimes stereotyped as tech-addicted and anti-social. Gen Z is also known as an “in-between” generation, as they mirror millennials on critical social and political issues, but without much of their optimism, and as Generation Alpha is online at a much younger age, it is distinctly hard to draw a line between these three tech-influenced generations.

This generation started in 2010- the year of the iPad’s launch – and the last Gen Alphas will be born around 2024. Much more remarkable is that they will be the most significant generation the world has ever seen, with 2 billion Alphas well on the way. We will see a continuation of some characteristics of Gen Z and Millennials, as their unifying factor is technology.


It is hard to keep pace with such distinctive generational changes and what they mean, especially when it comes to a young person’s experience of a rapidly changing world. These kids will have used technology proficiently by age six, have experienced a global pandemic, and their media consumption will primarily be through online content.

How Slang is Decided by the Youth

Experts are uncertain about the origins of the term “slang” (though many linguists believe it derives from Scandinavian languages). Some lexicographers claim that it is of Icelandic or Norwegian origin, possibly deriving from slyngva “(to sling”) or from slengja (“to sling the jaw”), which means “to use abusive language.”
In 1785, lexicographer Francis Grose defined slang as “cant” or “vulgar” language. Slang appeared before it was labelled as such under the name of “Thieves’ Cant”. This secret cryptic language was created in early 1600 England by thieves, tramps, criminals and vagabonds to confuse the authorities – and some of them even now confuse Americans.
The word “slang” has traditionally referred to a dialect or vocabulary of “low” or “disreputable” people. By the early nineteenth century, however, it was no longer exclusively associated with such groups but continued to be applied to usages below the level of standard educated speech.
Dictionaries define slang as ‘very informal usage in vocabulary and idiom that is characteristically more metaphorical, playful, elliptical, vivid, and ephemeral than ordinary language.’ It can also be described as nonstandard words or phrases, which tend to originate in subcultures within a society.
Schoolchildren at this time were taught that using slang was improper, but children will innately want to do what is forbidden. So, slang began making its way amongst the youth, and as time went on, it started showing up in popular cultures, such as plays and books, and in the early 1920s, slang had gained the interest of many famous writers. During the post-World War I era, society gained new attitudes about slang, and there was now a demand for slang in mass media and fiction.
As language evolves, slang eventually becomes mainstream, and some former slang words become acceptable enough to be used in formal speech and writing.

While “slang” is formed out of the intent to communicate and used in informal situations broadly, there is also “internet slang”, which originated some 20 years ago to save time and keystrokes by using acronyms and abbreviations (which has since spread to many oral and written language areas and is very much embedded in everyday speech), and “jargon” which refers to terminology that is defined explicitly about a particular activity, group or profession. It is, therefore, less about communicating to a broader audience and more about conveying as much content as possible in the same amount of verbal space.
For example, in the medical field, it is common to hear the term “stat” used as a directive to medical personnel during an emergency. The word comes from the Latin word “statim”, which means “instantly” or “immediately”.
You’ll also most likely hear the terms “bull” (or “bullish”) and “bear” (or “bearish”) among financial traders. “Bull” refers to somebody who buys hoping the value will increase, and “bear” helps describe someone looking to sell their investment as they expect prices to decline.

Words that change their meaning over time

Below are some examples of words that have shifted their meaning and usage over time and how the subsequent generations used the words in differing contexts.
● FTW

“F–k the World” used to be used as a defiant stance against everything, commonly used in the rebellious ages in the 70s. Now the abbreviation typically stands for “For the Win”, which is derived from online gaming culture.

The word used to mean “to make someone annoyed or angry”. This expression comes from an old tradition in horse racing, which is thought to have a calming effect on high-strung thoroughbreds; a goat was placed in the horse’s stall the night before the race. Opponents would then steal the goat to anger the horse and cause it to lose the race. The word now means “Greatest of all time”, which comes from the famed boxer Muhammad Ali’s nickname.

This used to mean that you were in a lot of trouble. For example, you got a bunch of missed phone calls from your parents because you were out late. Now, however, it is used in response to witnessing something incredibly funny or amusing.

This acronym was used to mean “so much hate” as an appropriate response to a hurtful or uneducated remark. It is now more commonly known as “shaking my head”, You use it when you want to react to something that left you at a loss for words, and the only thing you can think of doing is shaking your head.

In olden slang, salty meant someone who has been around the block and is someone you don’t want to mess with. Now that phrase has been wholly flipped and is used to describe someone annoyed or upset at something unreasonable.

This usually meant that you have charisma and attractiveness dripping out of you, but the word has changed slightly to become synonymous with “swag” or your clothing, outfit and accessories.

In some circles, the juice was slang for alcohol or illegal substances. However, now it is the be-all-end-all word to determine how much battery life your smartphone has.

This was used to express disbelief, whereas now “bet” is to express certainty, similarly to “all right”.

Technically tea was a response to people asking for the truth, “what is the tea?” However, now it means to gossip, as in “spill the tea” or “spill the beans” in response to how elderly women in the south would get together for afternoon tea and discuss the latest happenings.

Classifying slang can be difficult, especially as new slang emerges and is absorbed into the lexicon year after year. Ultimately, slang will continue to evolve at an increasing pace, creating a distinct generational language gap within the Silent and Alpha generations and everything in between.
With how frequently technology improves, novel vocabulary that combines older words and new terms will continue to be created and included within our global lexicon.
We hope you enjoyed this blog post, and if it sparked some creativity within you to create content for a new market or generational demographic, feel free to get in touch with us.
Our team of talented translators and linguists will be happy to ensure that your content is suitable for any audience and language.
Share this article!