The English language belongs to the Western group of the Germanic branch of the Indo-European language family. Its roots derive from the language used in the British Isles by the Germanic tribes, the Angles, Saxons, and Jutes, who arrived on the Isles around 450 AD. This language was the basis of Old English, which was influenced by Old Norse, spoken by the Vikings.

After the Norman Conquest in 1066, the kings of England only spoke French for over 250 years. Many French words were incorporated into Old English, which evolved into Middle English. It was at around 1500 when Modern English developed, following the Great Vowel Shift – an event that saw a series of changes in the pronunciation of the English language.

According to Ethnologue, there are approximately 335 million native English speakers, and around 500 million to over 1 billion speakers that use it as a second-language.

Where is English Spoken?

English is the de facto official language of four countries including the United Kingdom, the United States of America, New Zealand and Australia. It is also spoken in nearly all countries globally including Nigeria, South Africa, Cyprus, Israel and many more. 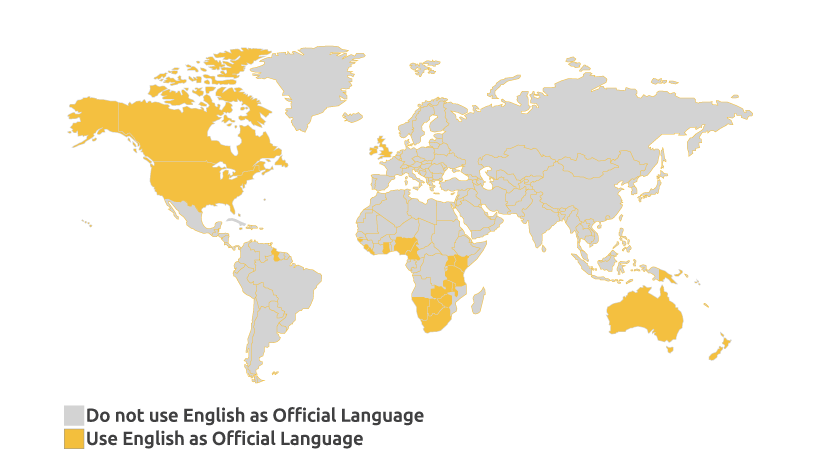 As of January 2020, English was the most popular language online, representing 25.9% of worldwide internet users.

There are many English words with meanings that have changed over the centuries. ‘Awful’ used to mean ‘inspiring wonder’, while ‘nice’ used to mean ‘silly’.
×

While there are several varieties of Standard English in the world, they are divided into two main groups:

“The English language is said to be one of the happiest languages in the world” (blog.lingoda.com)

Around 4,000 words are added to the English dictionary each year!

Around 4,000 words are added to the English dictionary each year!

• There are two number forms in the English language – singular and plural.

• There are definite and indefinite articles in English nouns.

• Verbs in the English language are only marked in the 3rd person (e.g., he/she/it eats).

• There are three voices – active, passive, and middle.

• Word order in the English language is Subject-Verb-Object.

×
Are you looking for professional English translation services? Get in touch with Pangea Global! We’ll hook you up with one of our professional linguists who will provide you with accurate and reliable English localization services, copywriting, voice overs and more!
×
Get In Touch
×