Portuguese originated in the Western Iberian Peninsula from Latin early in the 3rd century. However, it wasn’t until 1143 when Portuguese truly came about and Portugal became an autonomous country. At first, it was recognised as “Old Portuguese” from the 12th to the 14th century. It started to become popular in poetry in the Christian Iberian Peninsula and in 1290, the first Portuguese University (Estudo Geral) was established. This led way to the language formally being referred to as the “Portuguese language”. By the 15th century, Portuguese was being used for written documents and literature. Eventually, Old Portuguese developed into many dialects, specifically throughout Asia, Africa and America, where it became a lingua franca in many countries. It wasn’t until 1516 when the Modern Portuguese we know today developed, following the publication of the Cancioneiro Geral de Garcia de Resende.

According to Babbel, Portuguese is spoken by approximately 260 million people worldwide.

Where is Portuguese Spoken? 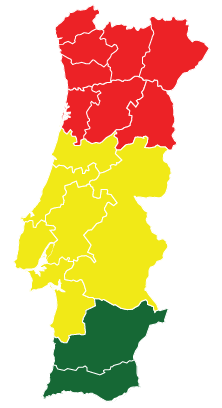 Portuguese is the seventh most spoken language in the world!

There are differences between Portugal Portuguese and Brazilian Portuguese! These include:

• Grammar and Spelling – e.g. Some words have the same spelling, while others are spelled differently, usually with an addition of a letter or suffix – “when describing something as small or cute, European Portuguese speakers add -ita at the end of the noun. Brazilians add -inha at the end of their nouns” (theculturetrip.com); Brazilian Portuguese uses verbs in the third person for the informal tone, but Portugal Portuguese uses verbs in the first person.

• Vocabulary – there are wording differences, for instance in Portugal, a bus is “autocarro,” but in Brazil, it is “ônibus.”

False Friends in Portuguese and English

Out of all the Romance languages, Portuguese has the richest vowel system! It includes monophthongs, diphthongs, and triphthongs.
×

• Most Portuguese nouns are either masculine or feminine. Masculine nouns generally end in -o, -e, or a consonant, while feminine nouns end in -a. However, there are also many nouns without gender.

• The Portuguese language has no case markings.

• The four moods for Portuguese verbs are indicative, conditional, subjunctive and imperative.

×
Are you looking for professional Portuguese translation services? Get in touch with Pangea Global! We’ll hook you up with one of our professional linguists who will provide you with accurate and reliable Portuguese localization services, copywriting, voice overs and more!
×
Get In Touch
×