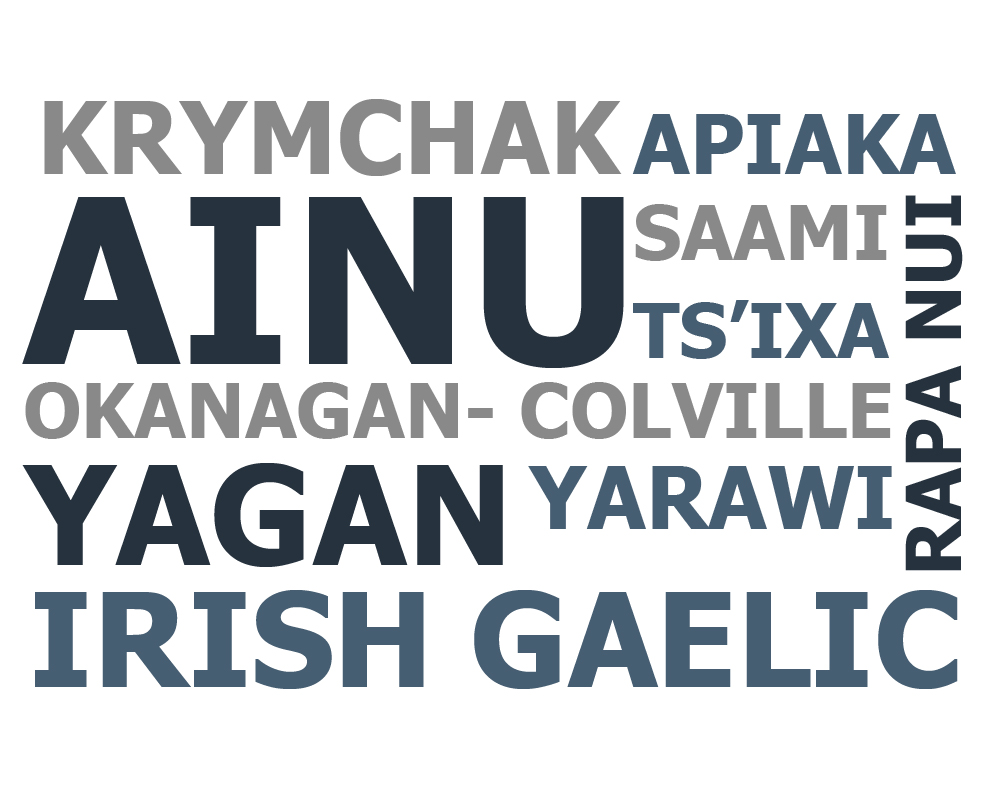 According to InfoPlease, there are around 6,500 spoken languages in the world today. Believe it or not, a large number of these are at risk of extinction and being completely forgotten. Some are spoken by people in the thousands, while others have just one remaining speaker left in the world – yes, one!
To find out what they are, scroll down to discover 10 of the most endangered languages of today…

Thought the Irish only spoke in English? Wrong! In fact, over 40,000 speakers in Ireland use the Irish Gaelic tongue. This language is spoken by communities named Gaeltachts, and it is considered one of the most endangered languages in the world. The government have tried their hardest to maintain this language and use it in schools, but their efforts have failed multiple times, leading it to be classified as vulnerable.

Rarely heard of, and incredibly at risk is Krymchak, a language spoken by the Crimea people, a peninsula of Ukraine. Also referred to as “Krimchak” and known as Judeo-Crimean Tatar, this tongue is believed to be used by 200 native speakers (2007), who were born during or before the 1930’s. Despite Krymchak being spoken by a small number of people in Ukraine, Pangea offers Ukrainian or Russian translation services in its place!

Listed in our top 11 Nordic languages, Saami, which is actually a family of languages is yet another tongue that is close to extinction. Spoken in Norway, Sweden, Finland, and Russia, this language is used by around 25,000 to 35,000 people in these Northern regions. It is used by the older generations, and doesn’t look to be lasting past another century or so.

Shua, spoken in Botswana, has another language closely related to it, known as Ts’ixa. Also referred to as Ts’exa, this endangered tongue in South Africa is apparently only spoken in the village of Mababe, by less than 200 people. It is used mainly by adults, while children prefer to use Setswana or English as their native tongue.

Okanagan-Colville is a scarce language, mainly used by communities in British Columbia, Canada. Spoken by just 150 speakers, this Native American language also known as Nsyilxcən, is facing immense extinction in today’s day and age. The Catalogue of Endangered Languages, or ELCat, however, have managed to preserve areas of the language through a number of resources like videos.

Another language facing extinction is none other than Rapa Nui. This unique tongue is used on Easter Island, the volcanic island in Polynesia. In the year 2000, it was discovered that Rapa Nui was spoken by almost 3400 people. However, today, the primary language used on this famous island is in fact, Spanish.

Gravely in danger, and almost certainly dying, is the language of Ainu – spoken by only a few people in Japan. This Asian language is believed to be used by only a handful of people, namely ten, who are elderly and belong to the community of the Ainu people. Within only a few years’ time, Ainu will unfortunately be considered an extinct language of our generation. Those looking to target communities in Japan, can opt for Japanese translation services by Pangea. The language is spoken by 130 million people, after all.

It doesn’t get more shocking or sadder than this. Yagan is officially only fluently spoken by one person. This indigenous language of Chile is one person away from being considered extinct. There are however, numerous other speakers of Yagan, but who are not fluent or native in the tongue. This video on YouTube shows an elderly woman showcasing the beauty of the dying language.

Yarawi is a dying language used in the Morobe Province. Considered a Papuan language, it is said to belong to the Binanderean family of the Trans-New Guinea phylum of languages. Although mainly spoken during the 20th century, Yarawi is currently used by just one person. Natives are now more popularly using the language of Binandere, instead.

Again, just one speaker of this language remains alive today. Apiaka is used by the indigenous people of the same name in Mato Grosso, Brazil. Critically endangered, this one-of-a-kind language has been replaced by the language of Portuguese by the Apiaka tribe. Many have attempted to bring the language back to life, particularly through the initiative of the ‘Apiaka Word’ textbook. Want to target similar markets? You can order Portuguese Brazilian translations from Pangea Localization Services, instead!
As a professional translation company, we make sure to offer quality translation and localization services in alternative languages to the dying ones listed above. Whether it’s Spanish, Japanese, or Portuguese, we’ve got the team to help your content get captured by any local audience. Worried about targeting a community that uses an endangered language? Just get in touch with Pangea to find out how we can help!
Share this article!