The 10th century saw the development of three Slavonic language groups – Western, Southern and Eastern. Eastern Slavonic soon developed into what we know today as Ukrainian, Belorussian and Russian.The three language groups used one common written language – Old Church Slavonic. It was in the 9th century when the Cyrillic alphabet was introduced by missionaries, Cyril and Methodius.In Russia, Old Church Slavonic was the official written language until the 18th century when a new written language developed based on the educated spoken norm. The three language styles, High Style, Middle Style and Low Style were introduced by the famous M. V. Lomonosov. With features of East and Church Slavonic, the Middle Style is in fact what helped form the foundations of the modern standard language. It was in the 19th century when Standard Russian, based on the Moscow dialect became the official language.

Where is Russian Spoken?

Russian is the largest and most spoken Slavic language and it is the 8th most popular language in the world. There are approximately 170 million native speakers while another 113 million speak it as a second language.
It is spoken in countries including Russia, Belarus, Kazakhstan and Kyrgyzstan and it is considered an unofficial lingua franca in countries including Ukraine, Azerbaijan, Estonia, Georgia, Latvia, Lithuania, Moldova, Tajikistan, Turkmenistan and Uzbekistan. 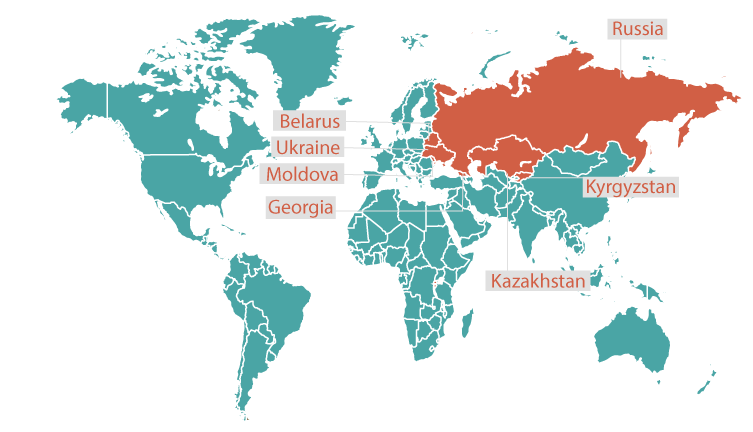 Belarus, Kazakhstan, Russia, and Ukraine all use the same Russian written language so there would be no need to hire separate translators for each! However, these Russian-speaking countries may have different pronunciations of the language.
×

The Cyrillic alphabet is very similar to the Greek alphabet but with around a dozen extra letters to represent Slavic sounds that the Greek language does not have.
×

It is one of the top 15 non-English languages in the U.S!

If you learn Russian, it will be easier for you to learn other
Slavic languages like Polish, Czech,Bulgarian or Croatian!

Russian words are similar to English!

Some words are very different to English although they look/sound the same!

• Russian nouns have 12 variations depending on how they’re used in a sentence. There are also many Russian verbs whose endings depend on tense, gender, mood, and amount.

• Know your audience – Russian translates differently depending on whether you use formal or informal registers.

• Watch out for punctuation – Russian uses chevrons («») as quotation marks and the “ symbol isn’t used at all! Also, the dollar sign is placed after numbers!

• Native Russian words hardly ever start with the letter “A” except for a few like азбука (alphabet) and авось (perhaps).

• The way you order words doesn’t really matter in the Russian language (in terms of grammar).

×
Are you looking for professional Russian translation services? Get in touch with Pangea Global! We’ll hook you up with one of our professional linguists who will provide you with accurate and reliable Russian localization services, copywriting, voice overs and more!
×
Get In Touch
We use cookies to ensure that we give you the best experience on our website. If you continue to use this site we will assume that you are happy with it.OkPrivacy policy