Swedish is one of the three Scandinavian languages to emerge from Old Norse – the language of the Vikings. Dubbed a ‘North Germanic language’, there was much Danish influence on Swedish before 1525 when King Gustav I Vasa gained power. He famously gave rise to Modern Swedish after ordering a Swedish translation of the Bible. This led to Swedish being spoken and written uniformly among the people.

Swedish eventually gained influence from other languages such as Low German, especially in the 17th century. As one of Europe’s main languages, French also had an impact over the evolution of the Swedish language in the 18th and 19th centuries. It was after the 19th century when a sense of national identity brought about the popularity of the Swedish language, when figures like August Strindberg, encouraged the standardisation of its grammar and vocabulary.

According to Babbel, there are around 10.5 million people who speak Swedish around the world. Approximately 9 million of these people are native Swedish speakers, with 8.5 million living in Sweden.

Where is Swedish Spoken?

Swedish is the official language of Sweden and one of the two national languages in Finland. It is also a common language in other countries around the world including Estonia, Ukraine, and other Scandinavian countries like Denmark and Norway. The U.K, U.S, Germany, France, Switzerland and the Netherlands also have a large number of Swedish speakers. 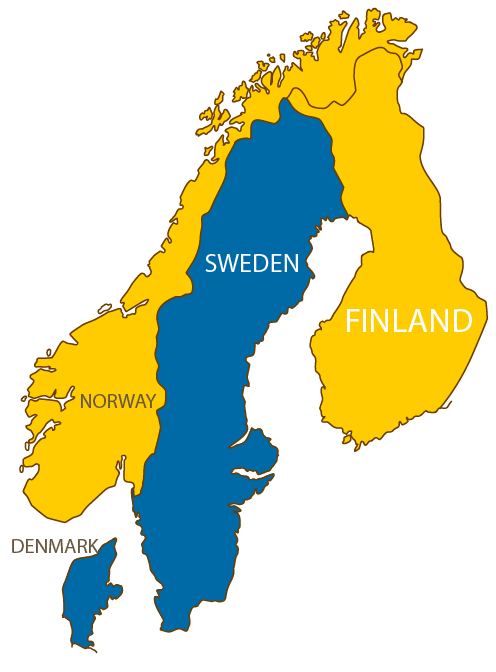 Did you know that Swedish has the highest number of speakers compared to all the North Germanic languages?
×

Swedish can be categorised into six dialect groups, although
there are said to be a few hundred out there.

Did you know that more words in Swedish begin with “S” than any other letter? There are very few that start with “Q” or “X”.
×

False Friends in Swedish and English

“Swedish is considered one of the easiest languages for English speaking people to learn.”

• Remember rules of word order in Swedish – the finite verb appears in second position in a declarative main clause.

• There are no case endings in nouns except for the possessive “s”.

• The Swedish language has only two genders – neuter and common.

×
Are you looking for professional Swedish translation services? Get in touch with Pangea Global! We’ll hook you up with one of our professional linguists who will provide you with accurate and reliable Swedish localization services, copywriting, voice overs and more!
×
Get In Touch
We use cookies to ensure that we give you the best experience on our website. If you continue to use this site we will assume that you are happy with it.OkPrivacy policy