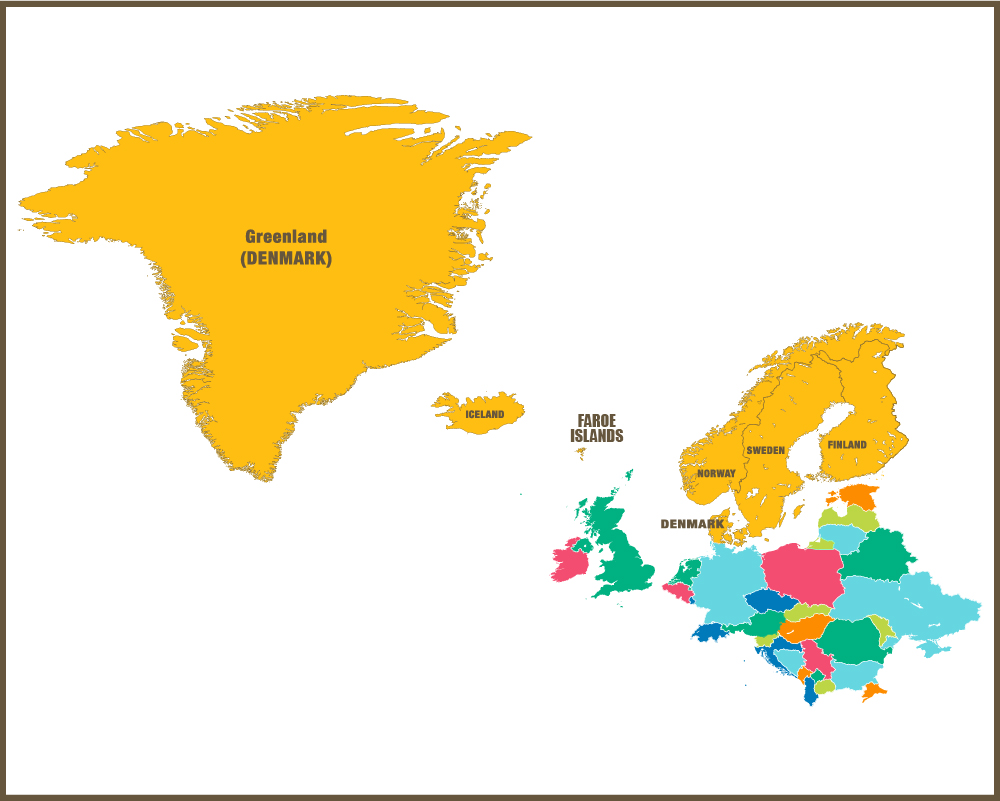 As a fast and professional translation service provider, we have come across several language requests by our clients. Some of the most popular are those belonging to the family of Nordic languages. They include Swedish and Danish, and often, Norwegian. If you, too, are on the hunt for fast translations in these languages, have no fear, because we’re a qualified LSP in all of them.
So, without further ado, here is a list of the most popular Nordic languages around the world…

Swedish is the most popular Nordic and Scandinavian language on our list. It is spoken by approximately 10.5 million people around the world, in countries such as Sweden, Finland, Estonia, Ukraine, and other Scandinavian countries like Denmark and Norway.
Fun fact? If Swedish, Danish and Norwegian were sisters, Swedish would be the oldest – it is one of the three Scandinavian languages to emerge from Old Norse – the language of the Vikings.

The second official spoken language of the Faroese Islands and Greenland, Danish, is spoken by around 6 million speakers. The official language of Denmark has a very strong influence on other Scandanavian languages. It is extremely similar to Swedish and Norwegian and all three are mutually intelligible.
Fun fact? “The Emperor’s New Clothes” and “The Ugly Duckling” were originally written in Danish!

Although different from the 4 main Nordic languages (Swedish, Icelandic, Danish, Norwegian), Finnish is still a common tongue spoken in the region. It is used by approximately 5 million people in countries including Finland, Sweden, Estonia, Norway, Russia and North America.
Fun fact? Finnish is officially the language of metal music. More heavy metal bands come from Finland than any other country.

Norwegian is spoken by a whopping five million people around the world. The Nordic language is mainly used by citizens in Norway, and few in other countries such as Spain and the USA. Norwegians can easily understand Swedish and Danish. For this reason, the language is humorously referred to as the middle child amongst the three sisters.
Fun fact? ?There are two forms of the Norwegian language, known as Bokmål and Nynorsk.

Although there are other languages that have emerged from Old Norse, Icelandic is said to be the one that resembles the language the most until this day. It is officially the least spoken North Germanic language, with only 320,000 – who reside in Iceland.
Fun fact? Many people outside of Iceland are starting to consider Icelandic as a “dying language”.

Faroese, the language of the Faroe Islands is believed to be spoken by around 75,000 to 80,000 people. It is one of the many Nordic languages that was brought over by Norsemen who settled on the islands. Also used in Denmark and Iceland, Faroese is said to closely resemble Norwegian.
Fun fact? According to WorldWithLittleWorlds, Faroese is an endangered language.

The Nordic language of Sami is referred to as a Fenno-Ugrian language. It is spoken by 25,000 to 35,000 in northern Finland, Sweden, and Norway and on the Kola Peninsula in Russia. There are believed to be 10 Sami languages in the region, however only 6 have written standards.
Fun fact? Although there are several versions of Sami, people who speak them may not understand each other.

Mentioned previously, Nynorsk is one of the two written standards of the Norwegian language. It is spoken by 12 percent of the Norwegian population, and has been declared an official language by one-fourth of Norwegian municipalities in the country.
Fun fact? Nynorsk translates to “New Norwegian”!

Meänkieli is used by 40,000 to 70,000 speakers, mainly in Northern Sweden. Although this Nordic language is considered a “variant of Finnish” (in terms of grammar and structure), Meänkieli actually has a vocabulary that is strongly impacted by spoken Swedish.
Fun fact? Meänkieli is used in textbooks and schools. It is not however used outside of schools.

Used by the citizens of Northern Norway, Kven is a mix of Norwegian and Finnish and it is mainly spoken by only 1500 to 10,000 people. Interestingly, most speakers of this language are over the age of 60. For this reason, Kven is also considered an endangered language.
Fun fact? Kven is referred to as a Finnic and minority language.
Want to translate your content into a Nordic or Scandanavian language? Translation company, Pangea offers language services in a range of these languages! Get in touch!
Share this article!