They Really Have a Word for Everything – the Best German Words 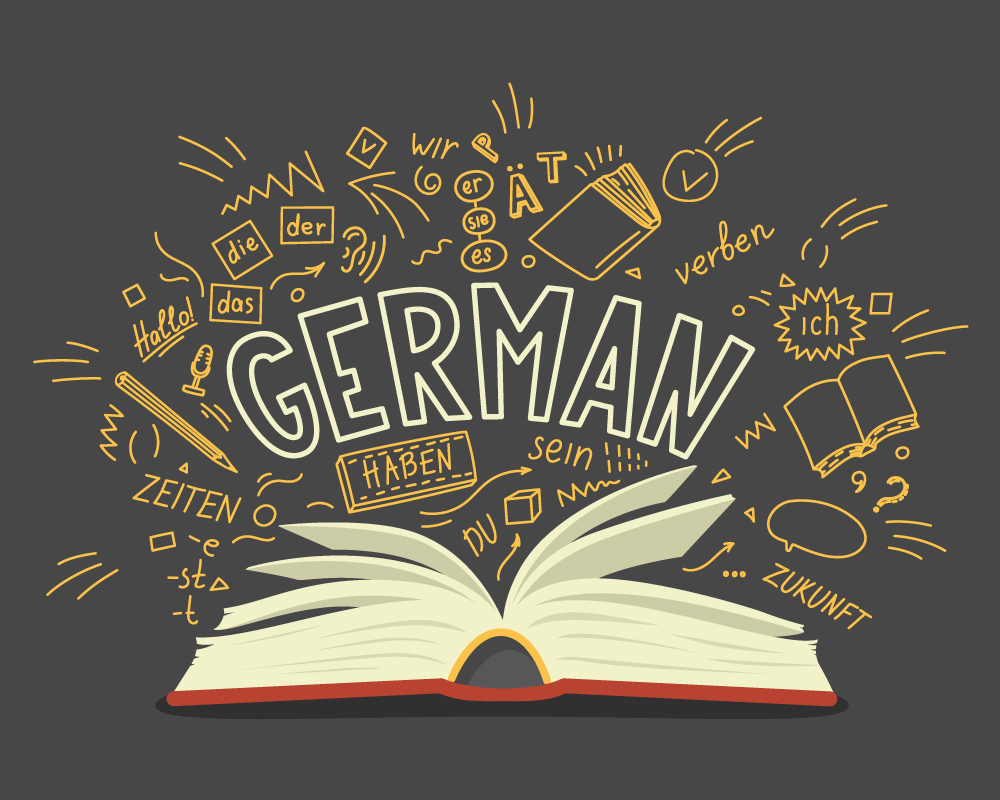 We’ve all heard the phrase, “The Germans have a word for everything!” But is it true?

It’s hard to imagine otherwise when they have words like Politikverdrossenheit, meaning disenchantment with politics (which I’m sure is how most of us feel these days) and Futterneid, which means “the feeling when you’re eating with other people and realize that they have ordered something better off the menu that you would rather eat yourself” – it’s a mouthful for sure.
This blog will explore some of our favourite German phrases, “untranslatable” words, and some words that are so literal that you can’t see them any other way from now on.
However, first, we will look at German syntax and how it compares with the English one that most of us are familiar with.

The Structure of the German Language

Everyone learning English knows the drill of sentence structure when forming sentences in the language: Subject, Verb, Object (SVO). In most situations, the German word order follows the same basic rules, but because the language can be a bit more flexible, it can easily confuse learners.
The best way to explain syntax is by using the force – with the help of a little green Jedi.
For those who aren’t familiar with the Star Wars film series, Yoda is an alien who, when speaking English, uses what seems to be an OSV syntax instead of the traditional SVO syntax.
For example, “Much to learn, you still have” (one of Yoda’s quotes) means, ‘You still have much to learn.’ This sentence formation is incredibly rare in the real world, as most languages adhere to either SOV or SVO. The creators opted for Yoda to speak this way so that, to an English speaker, the way he orders his sentences sounded vaguely riddle-like, which added to his mysteriousness.
Interestingly, when the films were dubbed into other languages, to retain the same vein of mystique for the character, they opted for different sentence structures or other linguistic deviations to ensure it was “alien” enough for their target audiences.
For example:
● Czech: Free word order language. Yoda speaks in SOV.

● Japanese: SOV language. Instead of changing the syntax, he uses archaic vocabulary.

In German, however, as it is a very similar language in word order (SVO), they opted for the exact syntax for Yoda as in English – (OSV).

Now that you understand German syntax (and we got the pop culture reference out of the way), it’s time to learn about some of our favourite German phrases and where/when you should use them!
● Ich verstehe nur Bahnhof
(I only understand train station)

This is a fancy way of saying that you don’t get it, similarly to the English saying, “It’s all Greek to me”.

This expression is based on the assumption that people from poor backgrounds, where only simple food like soup is available, are uneducated and simple-minded. This is similar to the English saying, “I wasn’t born yesterday”.

A less common phrase, it means that you should try to be less forgetful. For example, if you forget and leave your car keys upstairs, you must use your legs to retrace your steps back up and fetch them.

It is used in the same context as the English phrase “being the third wheel on a date”. However, with German engineering, they tend to have more wheels on their carts – and it sounds like Germans also go on quite a lot of double-dates.

This is an idiomatic phrase similar to “you’ve lost your marbles!”—someone who has completely lost their mind and that nothing is rumbling around their head.

An absurd phrase means that a place (for example, a festival or a swimming pool in summer) is packed and full of people as if there was something extraordinary to see, like the Pope boxing in chain mail.

This phrase means that a place is in the sticks or the middle of nowhere, and nothing exciting ever happens.

When Germans get offended, they don’t act like drama queens; they act like an offended sausage. (They do love their Bratwurst!)

A relatively friendly way to tell someone to get lost or to go to hell. The origin of the phrase comes from when peppers were imported into Germany from Asia a few hundred years ago, and at the time, Asia seemed like a highly distant place to get to.

A phrase you say when your friend is telling you about some juicy gossip, but almost 40 minutes have passed, and you loudly exclaim that they should “just get to the point!”

An excellent way to say to someone that they are annoying you. First, they spill the milk, and now they step on the cookie – it sounds like a tough day.

The act of overcoming something that terrifies you to your core. When you launch yourself off the tallest cliff with a bungee cord when you’re terrified of heights.


● Da haben wir den Salat
(There, we have the Salad)

This is exclaimed when you expect something bad to happen, and, as it just so happens, it does. So now – we have the salad.


● Leben wie Gott in Frankreich
(Live like God in France)

A phrase that means “To live in luxury”. This is a common phrase used in Germany. There are a few ideas about the origin of the phrase. One of the most famous references is how clergy members lived in France during the Middle Ages.

The origin of this one is not really known, but it is a fun one to say. It’s meant to be expressed more casually, like the English phrase “that’s all, folks!” or “that’s the end of the story”.

With how literal the German language can be at times (which might explain why people tend to think of it as cold and stiff), it does help paint a pretty picture of certain everyday things. Take Windschatten, for example, which means wind’s shadow, the German word for slipstream.
On the other hand, let’s slow things down a notch and look at another beautiful word, Im Schneckentempo, meaning “at a snail’s pace”. Isn’t that just the perfect description for the English word “slow”?
Below, you can find some of our other favourite, literal German words.

English is a Germanic language with Latin influences. Its grammar and main vocabulary are inherited from Proto-Germanic, but a significant portion of the English vocabulary comes from Romance and Latinate sources – for example, French and Italian. Though it may not seem like it, with the staggeringly intimidating length of German words, English and German are considered 60% lexically similar.
One primary reason is the historical period of 500-800A.D. when Germanic tribes occupied England. It was later claimed by William the conqueror, who led the Norman invasion in 1066 when the Latin influences started seeping into the language.
Below you can find some of our favourite German words that don’t really have an English equivalent, and we badly wish that they do because some, like Kummerspeck, are highly relatable.
● Weltschmerz

It is a term coined by the German author Jean Paul, meaning world-weariness. The psychological pain caused by sadness can occur when realizing that someone’s weaknesses are caused by the inappropriateness and cruelty of the world and their circumstances.

A phrase similar to the French expression “L’esprit de l’escalier” translates to English as “staircase joke”. It means “a witty comment that only occurs to you once the moment has passed”. No matter the language, we all seem to experience the same phenomenon.

The act of taking pleasure in someone else’s misfortune. Is there someone in the world that you truly despise? Do you revel in happiness anytime they encounter lousy luck in their life? The English translation is “Harm Joy”, but it doesn’t quite capture the wonderful word the Germans coined.

Kummerspeck has an excellent literal translation – it means “grief bacon”. The meaning behind it is less amusing. It means the excess weight gained from emotional eating and eventual extra flab that appears on your body as a side effect of this situation.

Is there someone you know whom you find to be insufferably smug? Maybe whenever they open their mouth, you feel an uncontrollable desire to inflict a mild amount of physical pain on them. This great word describes a face that desperately needs to be slapped.

This word translates literally to “the feeling of being alone in the woods”. It’s the emotion you get when feeling most peaceful, undisturbed or in the thick of nature, where the sunlight barely creeps through the thick leaves and overgrowth.

● Sprachgefühl
This word refers to a natural talent or feeling for a language. We believe anyone can learn a language and develop a “natural” talent for language, and this is the perfect word to describe us for a blog about languages.

This one translates to “head cinema,”. It is used to describe the experience of playing out scenarios in your mind, whether it’s a series of images from the past or hypothetical scenes about the future. The term comes from the idea of playing a film in your mind, and this elaborate daydream can be pleasant or unpleasant, depending on the situation.


● Torschlusspanik
This is the feeling of having a dwindling amount of time to meet a goal. In English, it translates to “door-closing panic”. It generally refers to having a very narrow window of time to complete a project or deadline. It can be used in various contexts, so it is a very versatile “little” German word.

This term means “distance sickness” or “faraway pain,” which is nearly the opposite of homesickness. It means you have a strong desire to travel to distant lands, only satisfied when you’re living a nomadic lifestyle and happiest when seeing new places and meeting new people.

Now that the lid is closed and the monkey is dead, we hope you enjoyed this stroll through Germans’ extensive wortschatz (vocabulary) and found it as entertaining and educational as we do!
If your sehnsucht (desire) to learn more about languages has piqued your neugier, then read through some other posts on our blog, such as the brief history of constructed languages where we mention some other languages in a galaxy far, far away.
We have everything from the history of written language to the words that come from the language of love. And not only that, but we can also ensure that your dialogue will carry the meaning they intended when translated into German. We can also guarantee that you won’t sound like a little green Jedi Master who always needs to feel waldeinsamkeit (the feeling of being alone in the woods).
Feel free to reach out, and let’s talk about languages, here!
Share this article!