Croatian belongs to the South Slavic group of the Slavic branch of the Indo-European language family. Its history roots back to the breakup of Yugoslavia when the language, Serbo-Croatian (spoken among Serbs, Croats, Bosniaks, and Montenegrins) split into three mutually intelligible languages — Serbian, Croatian and Bosnian. These languages were formed on the basis of political reasons, rather than linguistic reasons.

Serbia became part of the Ottoman empire, while Croatia was under Austro-Hungarian rule, and eventually their languages evolved into different dialects and alphabets. In the 19th century, however, Serbian and Croatian became one language when there were efforts to create an independent South Slavic state. After gaining independence in 1991, Croatia reformed Croatian to separate it from Serbian.

According to Ethnologue, Croatian is spoken by around 5.5 million people worldwide.

Where is Croatian Spoken?

Croatian is the official language of Croatia. However, it is also commonly used in other countries such as Austria, Bosnia and Herzegovina, Germany, Hungary, Italy, Slovakia, Slovenia, Australia, U.S., and Canada. 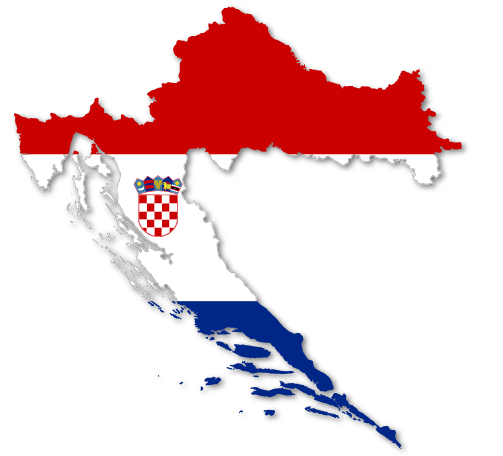 The differences between Croatian and Serbian and Bosnian are mostly lexical. They are still mutual intelligible though as they all share a common sound system and grammar. Croatian has preserved more native Slavic words, while Serbian has borrowed more from Russian and Western European languages.
×

Croatian used to be written in three different alphabets – Cyrillic, Glagolitic and Latin. As of the 19th century, Croatian used Gaj’s Latin alphabet. Although similar to the English alphabet, it has the following additional letters – č, ć, dž, đ, lj, nj š and ž and doesn’t have the letters – q, w, x and y.
×

“Croatian is a phonetic language. If you learn to pronounce the letters, you can sound out any word.” (adventuresinfluency.com)

• There are three genders in the Croatian language – masculine, feminine and neuter.

• The number forms include singular, plural, with some vestiges of dual.

• Croatian is a pro-drop language – personal pronouns can be dropped as the verb
ending makes the person clear.

• The neutral word order in Croatian is Subject-Verb-Object but other orders are possible.

×
Are you looking for professional Croatian translation services? Get in touch with Pangea Global! We’ll hook you up with one of our professional linguists who will provide you with accurate and reliable Croatian localization services, copywriting, voice overs and more!
×
Get In Touch
We use cookies to ensure that we give you the best experience on our website. If you continue to use this site we will assume that you are happy with it.OkPrivacy policy