Burmese belongs to the Lolo-Burmese sub-branch of the Tibeto-Burmese branch of the Sino-Tibetan language family. In its long history, this language has been influenced by speakers of other languages such as Pali and Mon, as these were the first to occupy the country of Burma in the 12th-13th centuries. Later, other European languages such as Portuguese, Dutch, English and French had impact on Burmese in the 16th-19th centuries. These languages only affected the spoken language of Burmese, meaning its written form differs quite drastically.

According to Ethnologue, Burmese is spoken by approximately 32 million people worldwide.

Where is Burmese Spoken?

Burmese is the official language of Myanmar (formerly Burma). However, this language is also spoken in other countries in the world such as Bangladesh, Malaysia, Thailand, and the U.S. 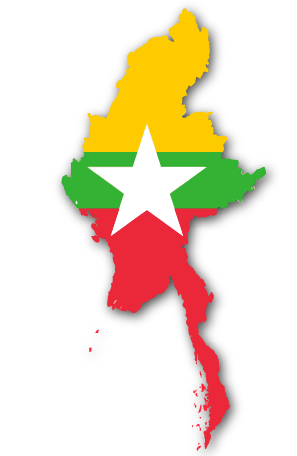 There are no last names in the Burmese language. Often, names would be rhymed and would use two words.T
×

According to Ethnologue, there are several dialects of Burmese such as Beik (Merguese, Mergui), Mandalay Burmese, Yangon Burmese, and Yaw.

MustGo report that there are also two registers – a formal (used in official publications, radio and TV broadcasts, literary works, and formal speech) and a colloquial one (used in everyday speech).

• Nouns in the Burmese language are not marked for gender, number or case.

• Plenty of Burmese verbs have a root plus separate particles that signify mood,
aspect, tense, positive/negative, and politeness.

• There are various politeness markers in the Burmese language and their use
relies on who is speaking to who.

• The word order in Burmese is Subject-Object-Verb.

×
Are you looking for professional Burmese translation services? Get in touch with Pangea Global! We’ll hook you up with one of our professional linguists who will provide you with accurate and reliable Burmese localization services, copywriting, voice overs and more!
×
Get In Touch
We use cookies to ensure that we give you the best experience on our website. If you continue to use this site we will assume that you are happy with it.OkPrivacy policy