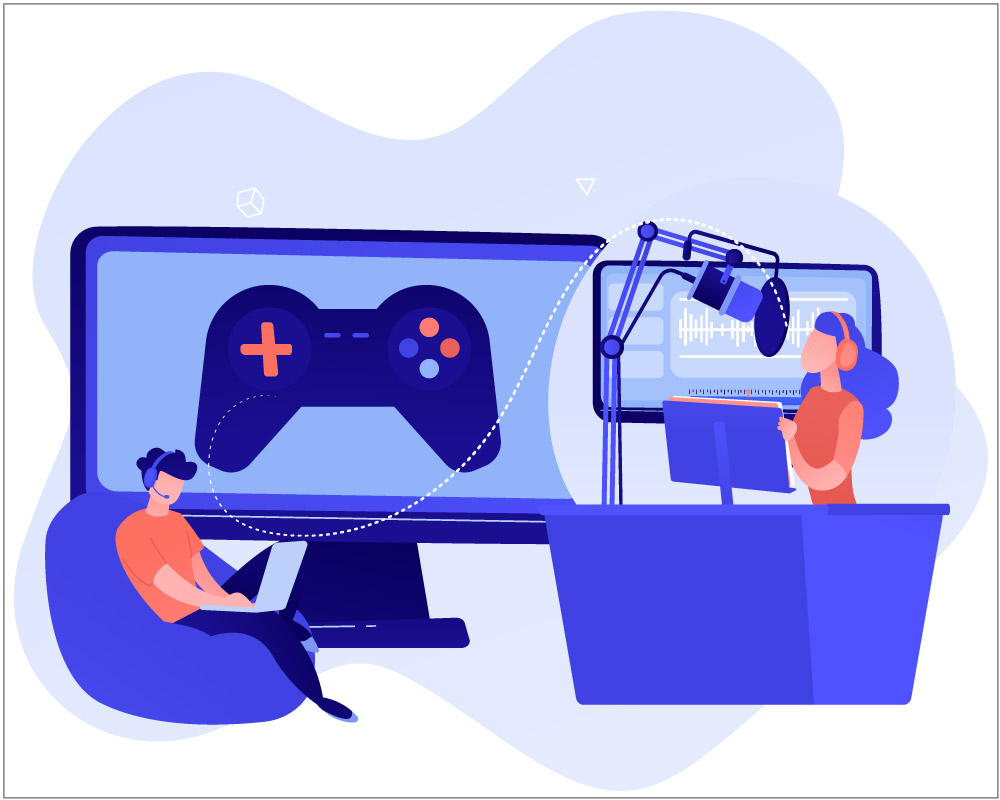 Remember Tetris? We must have all played it at least once when it hit the international market about 40 years ago, give or take. It was fun, creative and most importantly, it worked out your brain, as it was a skill-based game. A lot has happened on the gaming scene since then.

Video games have seen unprecedented growth over the past decades. Statista has determined that the global gaming market cap in 2022 sits at $196 billion. And this number is on the rise. Unquestionably, the ever-evolving video game industry and the sustained effort video game developers make to constantly reinvent themselves and come up with newer and bolder concepts, accounts for the industry’s expansion.

That and the ingenuity of each story, character, graphics, and ultimately – voice-over. In this article we take a look at a few brilliant video game voice-overs and what made them so hugely successful. With examples, you’ll absolutely love it. Turn up the volume!

Here comes Far Cry 3 – The definition of insanity! – when voice-over gets insanely good

Developed by Ubisoft Montreal, this first-person shooter was a colossal success. While the luxuriant setting, stunning graphics, and awesome gameplay, but also the voice-over.
Having an actor like Michael Mando give voice to Vaas, the iconic villain character, pretty much set the pattern for this type of character in the gaming industry. His ingenuity in swinging between a calm and soothing voice to a brutally angry tone in a short time span is absolutely remarkable. That’s what made Far Cry 3 a blockbuster game. You might want to give it another go (and another) after seeing this.

The House of the Dead 2, or when voice-over betrays the story

Next on our list is Sega AM1 (Wow Entertainment)’s shooter The House of the Dead 2. Acclaimed for its impeccable graphics, music, and well-crafted plot with surprising twists and turns, the game was sanctioned for its bad voice acting here and there.
Lest we forget, the game was released in 1998 when voice acting was not given much thought. And it shows. If you listen to a few of Goldman’s lines, it’s almost impossible to hold back a chuckle at the sound of that jerky, robotic voice. Here is a memento:
However, that did not prevent the game from being adapted several times and popularised on other platforms. Some of the adaptations include The Typing of the Dead, which later became an independent series; The House of the Dead III, a sequel; and even a remake The House of the Dead 2: Remake.
With so many variations on the same theme, The House of the Dead 2 leaves gamers scratching their heads. How could the voice acting be so off-key? Was it on purpose?
One gamer states it loud and clear: “I don’t mean to make fun of The House of the Dead’s vocal cast, either. Don’t know if their deliveries were this way on purpose. I do know that, every time I felt like the gunplay, action, or gore were about to overwhelm me, one of their voices would take some pressure off.”

The Last of US – Sarah’s Death, an Oscar for voice acting?

The zombie thriller survival story developed by Naughty Dog counts as one of the best video games the industry has ever… played. Its immersive plot, fierce foes, and characters with a complex psychology, are the main ingredients of its sounding success across borders. But what made it so hugely successful?
The Last of Us -Sarah’s Death has perhaps the most emotionally impactful story the gaming world has ever seen. You’re thrown into the tormenting depths of the plot right from the start as Sarah dies too soon.

The exceptional voice acting pours even more emotion into the story. Hana Hayes, giving voice to Sarah, gives a stunning performance. Troy Baker, playing Joel, Sarah’s father, also has an Oscar-worthy performance as he gives in to feelings of grief and melancholy following the loss of his daughter, artfully fusing them into his voice acting.

The perfect harmonisation between voice acting and plot development as the emotional charge peaks makes The Last of Us – Sarah’s Death one of the best games of all time. See for yourself!

Is there a secret formula for good game voice acting? With so many video games out there, some with better voice-over than others, it’s about time game developers raised the standard for game voice acting if they want their games to become blockbusters.

The 2022 edition of GamesBeat Summit in Los Angeles emphasised the need for engaging voice actors in the story development process.

Jennifer Hale, voice actress and summit panelist, compared game voice acting to film and television production, where actors are involved in every stage of the story development, which does not happen in the gaming industry.

“It was such a technically driven media for so long, but now the role of story and character is so important… It all comes back to collaboration, cooperation, not competition,” said Hale.

Involving voice actors in the story process is essential to creating a memorable game, as it gives them enough to emotionally-charge their interpretation and give the right character to the story.
But this is only one side of the coin. What about localization? Don’t leave the page just yet as we discuss voice-over localization shortly.

The importance of voice-over localization

Voice-over localization is the linchpin of your game marketing strategy, especially if you’re looking to expand beyond your domestic market. How can you localize voice-over? After all, you won’t change the storyboard every time you enter a new market. And a voice artist cannot work miracles with a poor script.
To cut costs, game studios will translate the storyboard themselves, with some doing a better job than others. In most cases, game developers will have done their research, managing to give the script a decent sound in the target language. Unfortunately, this is not always the case as sometimes, game translations result in outbursts of laughter.

Tales of Berseria (of which we featured a quote above) is a Japanese action role-playing game developed by Bandai Namco Entertainment. While most of the game translation has been handled with due care, once players stray away from the main quests, something weird happens… as if they stepped into a different world where language was viciously butchered.
This is a typical example of how localization can make or break gameplay. At least Magilou’s line achieved meme status. Joke aside, poor game localization can cost your brand dearly in the long run. Seeing your brand become the target of online banter is not something to be proud of. On the contrary.
Working with a professional voice-over and game localization agency like Pangea Global saves you all this pain and the headache, time and resources you would otherwise need to spend on market research, language and culture study, etc.
Pangea Global has a solid footprint in European, the US and Latin American markets, hiring over 600 video gaming professionals, localizers, translators, and voice artists in every market it operates in. Ready to talk game localization and voice-over?
Share this article!